So we went to the Kuwait Zoo this Friday and upon arrival, we were a little impressed with the clean entryway and the water fountains.

Unfortunately, that was just the beginning of the rigmarole of emotions I would feel for the next hour at the Zoo.

If any one of you plan to visit the Kuwait Zoo, please be warned, that beyond the ticket counter is- what obviously is very precious Kuwaiti Land- occupied by animal enclosures, fit to be called animal prisons! You walk into what seems like a huge garden with a cage in one corner, filled with more than 15 parrots sitting in the base as well as on one measly branch. Even in a normal household, we are advised to keep one parrot in a medium sized cage, what we saw there seemed like they had run out of funds to either extend the cage or stop the reproduction.

Further down the lane, we came across the Reptile area and even though snakes are not my most favorite animal, it was sad to see them displayed in ill spaced cubicle windows. It looked like they built a long shelf , around the perimeter of that room and then divided it with glass/fiber glass boards to keep the snakes separate from each other. I get that, that’s how its supposed to be done, but they were way too tiny.

After we stepped out from there we saw this

I don’t want to be extremely critical of everything I saw there, but the water was filled with trash. Empty water bottles and paper napkins and whatever the hell should be in a trash can.

But what followed was even more shocking! Do u see the gentleman in white, enjoying the view?

Now take a look at what hes up to

I dunno if you can tell, but there are two kids, not beyond the age of 4, inside the enclosure of these swans. There is an artificial lake running right behind these kids and I’m pretty sure that they didn’t go there, on their own. Please also notice, the smart man behind this endeavor was their father.

But the saddest most depressing part of the zoo was the elephant enclosure. 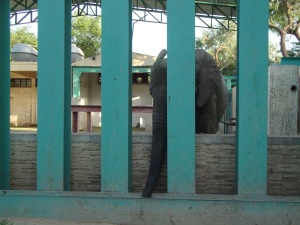 Whatever you see in the picture is all there is to the enclosure. But that’s not the worst part. Whats even more bewildering, is that there are two elephants in that space! I get that elephants are strong and they need big metal beams to keep them inside the enclosure but this is just cruel.

The plight of the Giselle/Deer enclosure was similar to this but 10 times worse. Obviously because there were ten times the number of animals in a single enclosure. Truly, it just made them look like herds of cattle and not exotic animals. 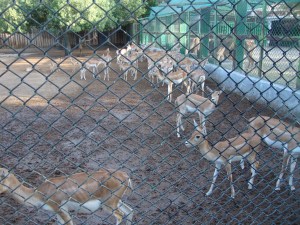 The peacocks suffer the same issue. It seems that the Kuwait zoo has more animals than they can afford to accommodate. This tiny space has 6 birds inside and they were fighting when I saw them. I can only imagine how frustrated they must be.

I urge animal conservationists to look into this matter and do something about it. The small size of the enclosures is not the only thing that’s worth the notice. The environment the animals are living in is dirty, the animals are frustrated and most definitely hungry. They look starved and sad and unfortunately stink beyond necessary – what with people throwing garbage and ice creams on them. The Zoo is obviously unable to care for so many animals and has turned into a park where people come and have lunch and throw trash at the animals.

Kuwait gets a minus 1 for this *thumbs down*.

I think this sign should be put right at the entrance of the zoo and not on the opposite side of the ticket counter where its obviously being overlooked. I wonder why !??