In an attempt, to fill in, the very long hours in Kuwait, I ardently Google on every Wednesday night, so that we can plan an outing on the following weekend :p

So that’s what I did a couple of weeks ago and found this post, about the tourist attractions in Kuwait. I was in no mood to take an elevator ride to the top of a tower and look at people from the height which make them look like ants. I’ve done that many times. So I thought, ok, lets go to the green island. Its near the Kuwait Towers and I read a few posts about the place, especially liked this one.

We did see a lot of trees and we did rent a buddy bike, the kind that has two seats side by side. That ride was fun. There was extra room in there for my son to fit, so the three of us went around the island taking pictures and enjoying the cool breeze. Which was, in itself, a special experience for me, since I have always only experienced terrible heat in the city.

I dunno, maybe Kuwait doesn’t like me, but there was something really disturbing about the Green island. I can assure you, I wont even have to explain,after you see the following images…. 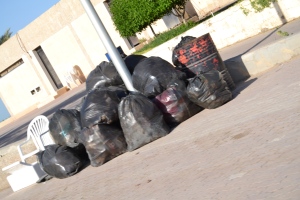 And there were more pictures with all the trash bags and dirt, but i decided that the blog was looking too dirty. Every few meters, there was a batch of trash bags- stinking and everything! We did enjoy the cool breeze, no doubt, but every now and then, we’d get a whiff of unpleasantness! Since we were riding the bike, we could only go that fast, so we did ride it out, slowly and painfully.

Its seemed like a good place to have get together s and picnics, but I really wish they’d keep it clean. There were a few families and groups of people making their way towards the park, where all the garbage was. Some had already set up tables and chairs for their picnic. We left as soon as we reached the bike renting point and returned the nice bike.

We also saw this while we were on our way to the Green Island: 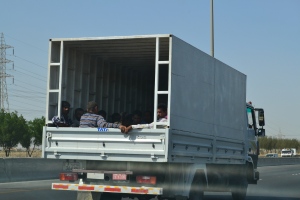 I wonder where they were being transported to…. I think some of them got scared, when they saw me taking pictures because they hid their faces and tried to cover them (it was funny) but then i felt really cruel for finding it funny, so i stopped taking any more pics. Honestly though, I was concerned about them being sent some where secret. Like they show in the movies…